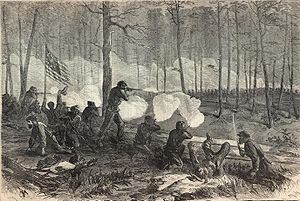 Confederates under General John Bell Hood defending the Confederate stronghold of Atlanta, Georgia made a third attempt to break General Sherman’s  hold on Atlanta.  The battle was part of the Atlanta Campaign also known as the Battle of Ezra Church.