Check out a Video Preview of the Civil War 1861-1865 Smithsonian Headliners Series.
Find original full-page images of actual newspapers from the past that have been collected and preserved in the rare and historical archive newspaper collections of Eric C. Caren and Stephen A. Goldman. To complement this unique newspaper chronology, the Smithsonian Institution has provided an added dimension of rare and historic images, including selected works from Matthew Brady, Winslow Homer, Currier and Ives, and the like. These newspapers bring history alive by revealing how events of the time were actually perceived and described by those in that era.

The American Civil War comes alive when seen through the prism of this unique collection of rare newspapers and illustrated news weeklies. Both Union and Confederate causes are represented, with large headlines, woodcut engravings, patriotic rhetoric and impassioned 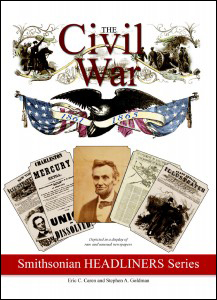 vitriol that flowed from the pens of those not-so-neutral newspapermen covering the conflict. Newspapers were then the primary means of mass communication and played a unique role in informing the interested public about the latest battles, troop movements, promotions in rank and casualty reports. This is our heritage in contemporary documentation. It is history at its source. All readers, especially Civil War enthusiats, will enjoy seeing the dramatic woodcut engravings, as well as the massive number of first-hand accounts telling of the events, both large and small, of this tragic episode in our nation’s history.