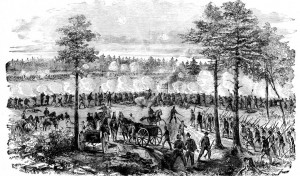 Confederate forces under A.P. Hill had been reinforced and struck hard at the Federals engaged in railroad destruction at Reams’ Station south of Petersburg. Federal casualties were 2372, of which around 2,000 were listed as “missing or captured”. Hancock’s 2nd Corps suffered a clear defeat but in fact Hill’s victory was empty. Destruction of the Weldon Railroad continued apace, and the program to extend the Union lines further and further to the right were not disrupted in the slightest.