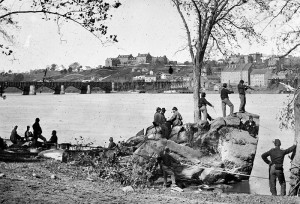 The Potomac River During The Civil War

Two armies were headed in General John Pope’s direction today. One, George McClellan’s Army of the Potomac, was an ally and anxiously awaited. McClellan. They suffered many delays in getting the men off the Peninsula and up to Aquia Creek. The other army moving in Pope’s direction was Robert E. Lee’s Army of Northern Virginia. They had hostile intent and better speed, so Pope backpedaled his men closer to the Potomac River.