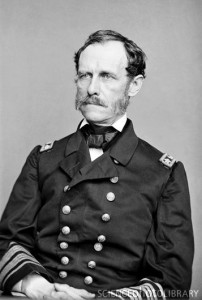 A bombardment began in earnest. The oversized rifled Parrott cannon on Morris Island were joined by other weaponry on Mossie Island as well as gunboats. The shooting was not completely one-sided though. Gunfire from Ft. Wagner killed Captain G. W. Rodgers, chief of staff to Union Admiral John Dahlgren.