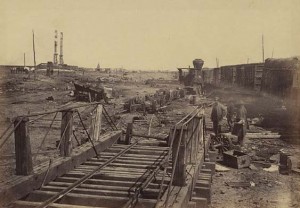 It was the largest army ever assembled by the United States of America. 1400 officers, marched 30,000 men out of the filthy training camps that they had been residing in around Washington D.C. The men had little training in marching or water conservation. They hiked awhile, got tired and sat down, or wandered off to pick blackberries. All the men drank everything they had in their canteens during the first few hours and had no way to refill them.