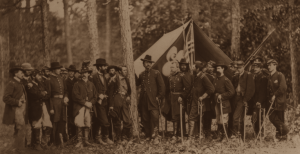 In 2004, Data Trace Media in cooperation with the Smithsonian Institution, published what was to be the first in a series of “informational coffee table” books.  The subject was the Civil War and the objective was to present the war through a series of actual images from newspapers of the time.  The newspapers that were chosen were from the archives of Eric C. Caren and Stephen A. Goldman, two of the most respected, long-time, rare newspaper collectors in the nation.  The full-page news images were complemented by a section of unusual and interesting art images from the Smithsonian – including works of war-era artists Currier and Ives and photographer Matthew Brady.  Caren and Goldman are named as the authors, although the book has very little actual written text continue reading…..

Quote from Lt. Charles Edwards
11th Texas Cavalry, Army of Northern Virginia
“Acquisition of this collection of newspaper articles from the Civil War period is a must for any serious student of the Civil War. The collection contains fascinating reading about the Northern and Southern perspectives of the Civil War. Especially noteworthy is the information that can be obtained concerning variations in both military equipment and 19th century clothing.”